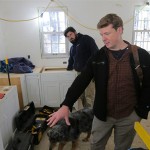 Courtesy of the Boston Globe.

Off a rural Essex road, nestled into a glade, the farmhouse and attached barn look perfectly at home here on the historic North Shore. Federal pilasters flank the door, a side ell with front porch houses the kitchen, and the barn attached to the house’s other side wears a handsome cupola. There is even that beautiful, convincing element of historical authenticity: a roof of red-cedar shingles.

The 3,000-square-foot Essex home is the most recent project of the venerable “This Old House” TV series; it will continue the show’s 36th season on Boston’s WGBH (Channel 2) beginning on Thursday, March 31. The traditional exterior gives the impression of age, but in this case, it’s an optical illusion.

This house is new.

“Usually, ‘This Old House’ does renovations,” said Richard Trethewey, the program’s plumbing and heating expert. “This is the show’s first brand-new historic reproduction.”

Here, the very program that has alerted Americans to the value of old houses and of traditional building methods and materials shows viewers that a newly built house born partly in a factory can look as though it has stood here for 200 years.

“We weren’t going to locate on the North Shore at all,” said homeowner April Harb, a cardiac sonographer and mother of 11-month-old Sophie. “We were looking on the South Shore until one day in 2012, we went to Crane Beach in Ipswich. It was our first time on the North Shore, and it reminded me of Maine, where I grew up.”

“The areas we connect with — Essex, Hamilton, southern Maine — have a lot of classic old homes that give those places their authenticity and personality,” husband Bill, a lawyer, added.

The couple, who lived in Charlestown, wanted to move to larger quarters in the suburbs when they started their family. But as they looked at real estate, their wishes and their budget did not align.

“We found that we have particular taste,” April said. “Happily, we learned that if we bought a lot and put a Connor Home on it, we could have what we wanted and stay within our budget.” They estimate that they saved at least 15 percent over a comparable stick-built house. “But,” Bill said, “you have to compare apples to apples. The higher-end materials and quality of construction, combined with the kinds of details you get, make this like the best custom house.”

Then they learned that Connor Homes wanted to turn their building project into a TV show.

Michael Connor’s company, founded in Middlebury, Vt., in 1969, started out building and designing homes using “panelized” materials from a manufacturer in upstate New York. In 2005, the firm decided to focus entirely on manufacturing its own homes.
Sconces from RH are perched over windows above the kitchen sink.

Connor explains the differences between factory-built structures: “ ‘Modular’ means it’s all built in the factory, shipped to the site in stacking blocks, and assembled there. ‘Panelized’ houses are more flexible: Custom designed, they have as many parts and pieces built in the shop as possible. You bring preassembled wall sections and put them up, utilizing traditional platform framing. The floor and roof systems are precut and partially assembled. Building one of our houses is not so different from any stick-built house.”

The advantage of panelized house building, Connor explained, is that it saves time on-site and makes for higher quality because the elements are measured, cut, and assembled under factory conditions.

“Prefab” is a loose term that usually means modular and is often derogatory, Connor said. For his product, he prefers the term “mill-built architecture.”

“Companies that manufactured modular houses did not focus on the artistic parts,’’ said Connor. “The focus for most modular products is materials standardization and manufacturing efficiency. When I was a student in Providence, Rhode Island, I saw the houses on Benefit Street and in Newport, and saw their scale and proportions and how the trim was perfectly a part of the design.”

He founded Connor Homes to bring new manufacturing technology to scrupulously accurate historic design executed in the best of traditional materials. To get it right, he measured the elements of countless old houses. Today, his company offers a catalog of panelized houses that range from 1,500-square-foot reproductions of 17th-century Capes to 5,000-square-foot Greek Revivals, Georgians, and Federal-style homes. The pricing varies according to the size of the home, its amenities, and the region where it has to be shipped. His firm’s share amounts to about one-third of the total cost of the home, Connor said.

“The Harbs’ house is what we call the Sarah Taylor House,’’ Connor said. His two daughters named most of his firm’s home designs, developed in conjunction with his wife and a staff of in-house designers. They would take “one name from my family, another from my wife’s family’’ and combine them to create a name they thought sounded like a real person from that architectural period. (However, “Sarah Taylor” is actually a combination of the daughters’ own names.)

Connor Homes came to the attention of the “This Old House” team, who saw the construction of a panelized historic reproduction as a good fit for the show.

“With most projects we update a time-honored building system,” said John Tomlin, senior producer of “This Old House.” “With the North Shore house, we see how state-of-the-art building techniques can produce a classic design.”

After their initial hesitation, the Harbs agreed to let their new house become a TV star. “We were a bit anxious at first,” April recalled. “But we were intrigued.”

“When we talked about it, we thought it would be great to have their expertise,” Bill said. “The team has a great depth of wisdom and knowledge.”

When “This Old House” films a building project, a crew that includes a director, producer, cameraman, production coordinator, and assistant comes to the site once or twice a week to film. Norm Abram, master carpenter; Roger Cook, landscape contractor; Scott Caron, master electrician; and Tom Silva, the general contractor, join Trethewey and host Kevin O’Connor to demonstrate the various construction steps for the television audience.

“There are pros and cons to a house-building project that is also a TV show,” said Erik Kaminski, whose company, Kaminski Construction Management of Newburyport, served as the builder and general contractor. “Guys show up and work more efficiently when they know that a TV camera is watching. On the other hand, when the TV crew is shooting, everyone else has to stop working so that the noise won’t interfere with the audio. That’s a little bit stressful.”

He said the technical aspects of building a panelized house were a boon.

“It was faster than a traditional building project because the pieces had already been done in the factory. It saves on labor and waste, and you’re not held back by weather.”

This was the first time his company built a panelized house.

“I was very surprised by how precise and well cut the component parts were; everything came together beautifully. In the end, everyone was happy, especially the homeowners.”

The Harbs said they chose a deluxe version of a Connor Home.

“A more basic package has more simple moldings, et cetera,” Bill said. “We opted for advanced trim with larger baseboards, crown moldings, window and door casings, and raised paneling in the study,” among other upgrades.

With an off-center entry, the new Essex house is an informal version of the early 19th-century Federal style. It has four bedrooms and three full and two half baths. Six-over-six double-hung windows have black sashes, bringing contemporary zing to historical accuracy. The layout is of today: From the garage, a door leads into a mudroom with cubbies and a ceramic-tile floor. The walls here, and in the hallways, are lined with a style of butted-board cladding known as shiplap. Just inside the front door is a wood-paneled study; the large, U-shaped kitchen, a pantry, and a bath are on the opposite side. A living-dining room leads from the kitchen to occupy the rear section of the house. The master bedroom suite is above the kitchen ell, while bedrooms, baths, and the laundry fill the rest of the upstairs, including a bedroom and bath over the garage/barn.

Interior designer Kristina Crestin of Manchester-by-the-Sea developed the decor. Working closely with the Harbs, she created an interior that features the blues and grays they love. Hanging barn-door tracks on the pantry and in the dining room, steel piping in the master closet, and bronze and brass lighting fixtures over the kitchen island demonstrate an industrial sensibility, also a favorite design motif of Crestin’s.

“I love to design like that,” Crestin said, “When Bill and April got excited, it was icing on the cake.”

The result is a house that looks as settled as its much older neighbors but with an interior suited to a young family of today.

“We love it,” Bill Harb said. “This is the ultimate New England house, and we are New Englanders at heart.”