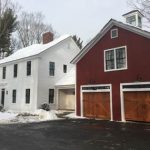 A Winchester contractor will have his work displayed nationally when it is featured on WGBH’s home improvement television series “This Old House.” The show’s first of 10 episodes premieres nationally on March 24, but will not air in the Boston area until March 31 at 8 p.m.

Erik Kaminski of Kaminski Construction Management, who said the majority of his business is done in Winchester, has worked on homes located on Forest Street, Everett Avenue and Wolcott, Maple and Sheffield roads. He was given the opportunity to be on the show when the show’s usual contractor, Tom Silva, got busy working on a house in Belmont for the show.

“It was quite a learning opportunity to do something on a show like that,” said Kaminski, who said he came on the show’s radar after working on the Belmont house. “I was very happy to be part of the show.”

Located in Essex, Massachusetts, the 3,000-square-foot home is a brand new 18th-century-style farmhouse.

Kaminski said architectural details are meant to give the house an old-style look.

“The idea of the show is, it’s a new house meant to look old,” said Kaminski. “From the exterior, it looks like a house that has been there forever, but from inside, it has all modern floor plans [and amenities].”

As the general contractor, Kaminski ran the entire project from hiring the workers to completing the project on time and on budget, in addition to ensuring a high-quality product.

Some sections of the house were pre-designed off site, then assembled once they arrived at the property, similar to the process of putting a jigsaw puzzle together, he said.

Kaminski said while a project of that scale usually takes nine months to complete, he expedited the schedule of the project for the show, completing the house start to finish in six months.

“I set a schedule and they pick out the dates they want to film and what they want to see. It did speed up production,” said Kaminski.

The process was also different for the crew.

“[There was] no makeup on the guys, it’s not that fussy of a show,” said Kaminski. “If we go to film a scene, the whole job has to stop; there can be no background noise. At first it’s cool, but it wears on the guys who want to get it done.”

“You find out when cameras film your job, guys are willing to work a little harder than they normally would,” joked Kaminski.
But at the end of the day, Kaminski said the focus is always on the clients, whether there is a television show filming or not.

“The homeowners are extremely happy with the [finished] product,” he said.