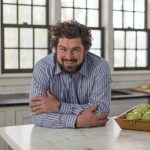 Ask his 1994 Chagrin Falls High School classmates what they remember about Erik Kaminski and they will say hockey skills so impressive they led to a full college scholarship and an NHL career.

Ask them if they knew he was getting ready for his close up as general contractor on the 36th season of the Emmy Award Winning PBS–TV show “This Old House” (TOH) and they may stammer in disbelief.

Indeed, Mr. Kaminski will appear in the new 10—episode season titled “North Short Farmhouse” scheduled to begin Sunday. But as the disclaimer goes, check your local listings for time.

He told the Chagrin Valley Times “most people would probably remember me as a hockey player so many would be surprised to hear that I am a builder now . . . I played hockey all my life from Junior A for Cleveland Barons, Team USA as an under 18 in Europe and in college at Northeastern University (Boston) before being drafted by the Ottawa Senators.”

How he got from ice to sawdust begins in Chagrin Falls, he said.

“I was always handy, my father and grandfather were both machinists so I felt it was an obligation to learn and know how things worked. Like most everyone else, I took seventh grade shop at the middle school and remember building a see through lamp. “

As for old homes, Mr. Kaminski said he grew up in different homes in Chagrin Falls Township, most of them older. Looking back on that time he feels fortunate to have had that experience. His mother still lives in a home on one of Chagrin Falls older streets.

The house he is working on for “This Old House” is a departure for the home improvement show and for Erik, owner Kaminski Construction Management in Newburyport, MA.

“Adhering to a television production schedule was an interesting twist for me but this particular project was interesting because it was a brand new house designed and built to look old. “

The “This Old House” publicity materials describe the home as a “new pre-engineered 3,000 square foot home with fine architectural details of the late 1700s. (which) captures the essence of historic architecture and detail in a new home with today’s practical layouts and modern amenities”

Mr. Kaminski said the challenge for him was the tough Northshore, MA terrain. “There was a lot of ledge that had to be blasted before we could dig and pour the foundation. “

He said he didn’t start out as a builder. In college he played hockey and majored in criminal justice then played hockey professionally. He admits he is not “an office guy” so when hockey ended he looked around for something he could do that fit his work ethic and the high energy sport that had been his life.

“For 20 years I spent almost every day on the ice, it was grueling but I loved it so I wasn’t about to sit still.”

His mother grew up in Massachusetts where a family friend was building houses on Nantucket, an affluent area which was enjoying a building boom at the time. He would be an apprentice to start but decided to give it a try.

“I packed my car in Chagrin Falls, drove 12 hours to the car ferry in Hyannis, MA.”

A winter storm hit about the same time Mr. Kaminski arrived in Hyannis and it took another three days before he could get to the island and his new career. Looking back, it was worth the wait for his new life to begin.

He said he found he picked up the trade quickly and there was plenty to do. The builder he worked for was putting two to three very large summer homes each year.

“Each was between 3,000 to 5,000 square feet and for me, it was a great experience because I learned how to build high end luxury homes with no detail spared.”

Those homes included details like coffered ceilings, ornate crown moldings, and custom built-ins in almost every room and a lot of thought and care put into building those homes, he recalled. They would prove to be valuable lessons.

After four years on Nantucket, he decided to move to the Northshore of Massachusetts and start his own company.

“The portfolio I built on Nantucket allowed me to secure several high end jobs and my company took off. . . building high end homes is largely a referral business. I get along with my clients, architects and subcontractors really well and work hard to keep my projects on time and on budget.”

Mr. Kaminski’s work include 80 percent historic renovations because there is a high concentration of older historic homes in Massachusetts. He is also past winner of the Historic Preservation Award presented by the City of Cambridge for work he did on an 1845 Greek Revival home.

“I live in a Newburyport, MA now, a coastal town 40 minutes north of Boston with lots of historic charm. Happily married for ten years, no kids. Turns out there are quite a few Ohio transplants here too.”